This past weekend, Global Game Jam® was given the “Decade of Impact” award at the Indiecade Festival 2017.

To celebrate a decade of operation, Indiecade awarded the Global Game Jam with a special one-time award “for their enormous impact on the game industry and especially the international independent community and ecosystem.” Global Game Jam founders Susan Gold, Gorm Lai, Ian Schreiber and Foaad Khosmood were bestowed this honor for creating an event that has had such long-lasting worldwide positive social change.

On Global Game Jam, Indiecade said: “At a time when everyone is looking at the ways we are divided, the Global Game Jam® has managed to bring the whole world together to make games.” “This is a tremendous honor” spoke GGJ Co-founder Susan Gold of the award, “I have always pushed myself to make a change in the world, and I know games are a gateway to social impact. I’m grateful to all the volunteers everywhere who help us put on the event every year. We did not do this alone. It was and always will be a team effort of thousands of people.” 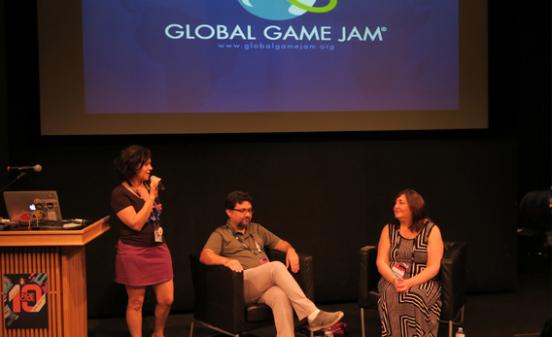 Since 2008, GGJ has consistently year-after-year provided a space for developers all around the world to create games and be a part of something larger than just themselves, their community, or their country. Held in January 2009, the first GGJ had 1,650 participants in 23 countries. Since then, the event has grown to over 36,000 participants representing 95 countries in 2017.

The Global Game Jam® has been the first step for game industries in developing nations, and a consistent birthplace for entire companies arising from Global Game Jam games, such as Accidental Queens’ “A Normal Lost Phone,” Bossa Studios's “Surgeon Simulator” and Steel Crate Games’ “Keep Talking and Nobody Explodes”.