Community Spotlight is here to tell the most inspiring, heart-warming, and successful, not forgetting the unsung stories that sprouted from Global Game Jam sessions during the years.

Vainary and the joy of memorable experiences

Vainary is a small independent game studio from Finland. They teamed up for Global Game Jam 2020, at the GGJ Turku site.

We love to try out new things with our games and strongly believe in creating memorable experiences, that are not just fun to play but also beautiful to look at.

"We all met back when we were game technology students and founded Vainary while we were still at school. We have much variety in both game interests - from Steam sale hoarding to casual mobile gaming - and skills, but we had worked well together and just got things done. By 2020 we had published two mobile games, as different from each other as we were!

When the year 2020 came around though, we were in a bit of turmoil. Graduation from school meant starting day jobs and shifts in priorities. We had less time for games and development, and we were debating what to take on as the next project while our team became smaller and smaller.
But still, for Global Game Jam 2020, we got the dream team back together: our fast-typing script creator, speedy polygon deliverer, the self-proclaimed jack-of-all-trades to glue those together and the erratic story writer who kept track of the post-its. For the weekend, we could just focus on the small bits, have fun and maybe a few clashes of opinions (ok, maybe more than a few) but produce a fun game without too much hassle. At the GGJ Turku site the atmosphere is quite relaxed, you know most of the other teams from beforehand and hence we can just pop in to see what they are up to with their projects and vice versa.

"It is an open environment where everyone is welcome to participate regardless of their background or skill level. It does not matter if you are new to game development or a seasoned jammer, the organizers will help you set up things either way", our artist Joonas Törmänen encourages.

The theme for GGJ 2020 was 'repair'. As always, we had a little brainstorming session with the theme. For extra inspiration we also went through the diversifiers and 'use only emojis' and 'language-independent' struck a chord with us.

"I think we first had just the idea of using emojis as the language of the game", our writer Sade Sirén reminiscences, "And wanted the player to try to decipher what was said in a blurt of emojis."

In the end we had a vision of Dr. Emoji: a game where a therapist is trying to help their patients, but all dialogue is in emojis only. Let us just say that this is some trendy new therapy form, of conveying feelings in their purest form, or something. 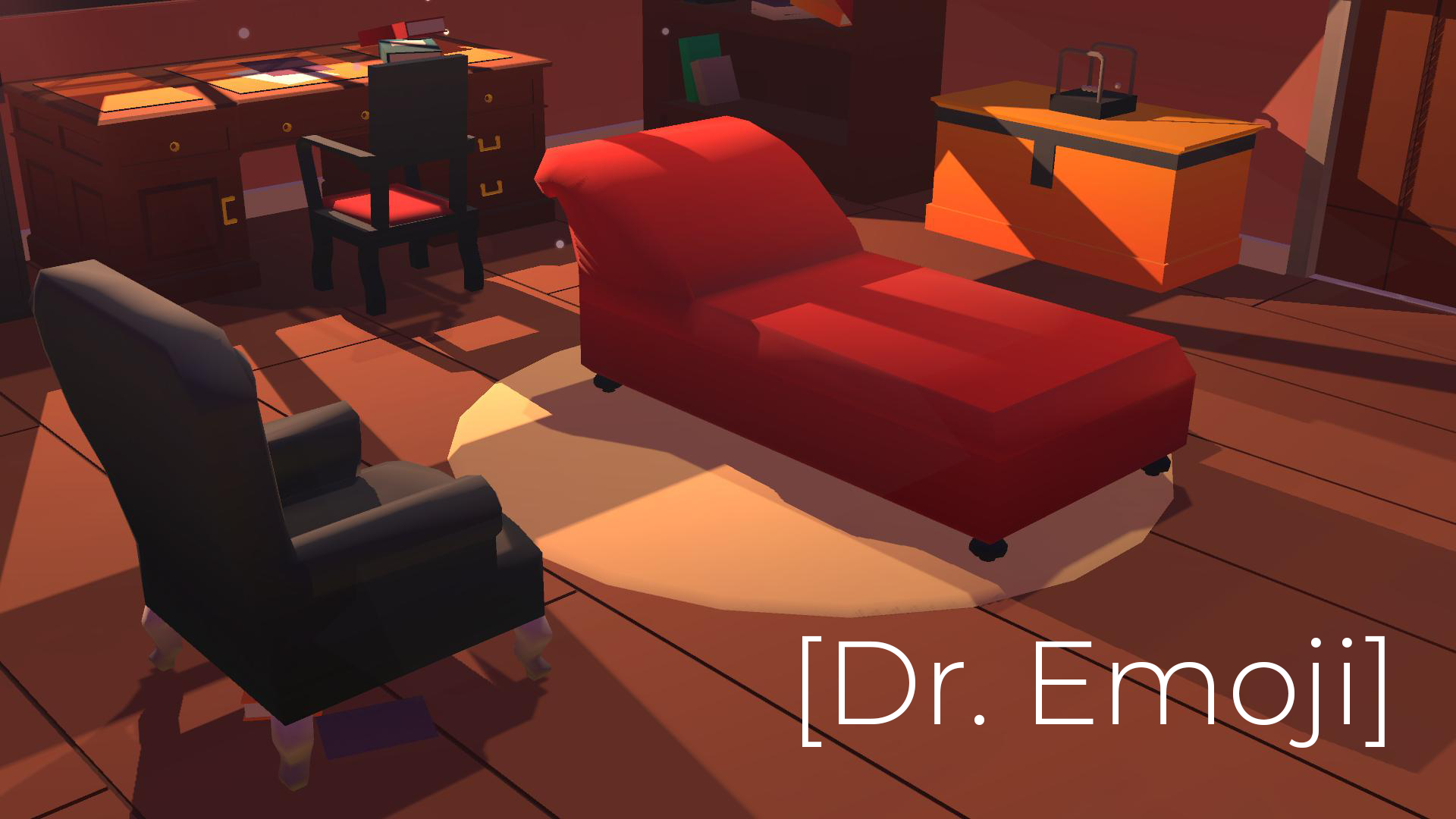 Part of the charm of Dr. Emoji is in the atmosphere of the game: you hear a soothing music track (made by Jussi Elsilä), the therapist's room is warm and cosy and all-in-all it should just feel relaxing. Which is a nice contrast of the startle you get once a patient starts to speak and all you see are some seemingly random emojis and the first thing you think of is along the lines of 'what the ... am I supposed to do?!'. We have seen clips of people playing the game (and let us tell you, we loved to see those!) and although that is the usual initial reaction, it does not take long for them to start to kind of understand what is said between the therapist and the patient. It is amazing how adaptable our linguistic brains are! Most of the time, players got the 'stories' just right, translating the emojis into understandable concepts.

We set out to make a simple little game, but what we got was people downloading the game more than we anticipated, and even filming playthroughs for YouTube. We really proved to ourselves that if we focused on the development, we could really get a game that we could be proud of done in a weekend.

"This time it felt like everyone on the team had a pretty similar view of the final game, which made everything go far smoother than it usually does during game jams where everything is hectic and nobody gets enough sleep", Matti Mänty added.

We have done GGJ games with varied success for many years, and what we want to emphasize for others is that you should not worry about making the best game, or even a good game during a GGJ weekend. You will probably make a lot of not-so-good games, but if you learn from them, take note of what did not work (in the GGJ setting, like scoping too big, or in general, like a bad gameplay design) and what worked very well, then eventually you will make a game that you can stand behind proudly. A GGJ is a boiled down game development experience, a jump to the deep end. However, we can easily recommend participation to everyone who is interested in making games - not just playing, but indeed creating and developing games. Just make sure you take on a project that is at your level and small enough scope that you can get it done in those very few hours. It can be very simple. And then you learn from it and make something more complex next year!

"As for Global Game Jam events in general, I think it is a great place to catch up with old friends and meet new people. It is not always about building the game but about building and maintaining contacts with other people. For me that is the most important aspect of GGJ and even after years since working together, the GGJ is the event where we are always able to meet again", concludes our programmer Sampsa."

We will definitely come back in 2022, hopefully to make another great game, but at least just to hack and hang out together again.

You can find Vainary at: