This news story is not related to the current or upcoming jam.

Early Coffee Games: "Whether you are experienced or a total beginner, in a team or alone, the GGJ is a super cool opportunity for everybody."

Early Coffee Games' Tristan and Jonathan took part in GGJ 2019 in Geneva. This is their story and greetings to the Global Game Jam Community.

"Hei Hei! We are Tristan Thévenoz and Jonathan Giezendanner from Early Coffee Games. We are currently working on Hermit: an Underwater Tale, a game we prototyped during the Global Game Jam! We do this in our free time, so progress is slow, but we are very passionate about what we do! We are currently working with 3 other people: Plume Oggier who is doing our awesome music, Jonathan Fellay who is helping us with narrative design and Gwen Buord who is doing the sounds.

We took part in the GGJ 2019 in Geneva. We were really excited and looking forward to being part of the event. Big shoutout to the Geneva team for organizing everything and taking good care of everybody. We met a lot of friends and cool new people, and ate waaay too much pizza! 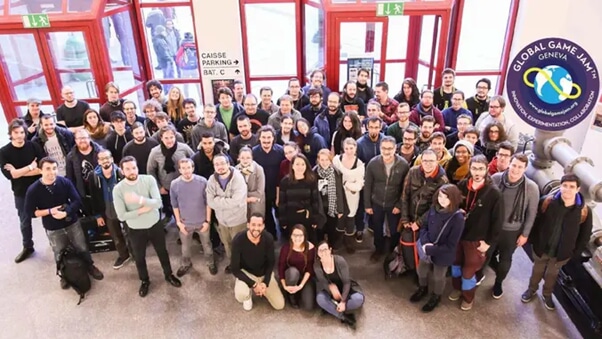 We were planning to be a team of two as we are used to. Giezi is the programmer of the team and Tristan the artist. We both work on every game design aspect of our projects and discuss everything together. After setting up our computers, we immediately started working. We drew some doodles on paper first and after agreeing on what we thought was a clever and original idea (spoiler: it wasn’t), we went straight to programming and art stuff.

"I remember being already exhausted from work on Friday night. Drawing anything felt like a chore and I wasn’t happy with the results. I had to redraw many props on Saturday morning." –Tristan

Being there in person and having food and drinks at your disposal means you can focus on just one thing: creating a game in one weekend. This is something relatively rare, as we create games in our free time.

Our goal for the jam was clear from the get go: we wanted to create a full game that was aesthetically pleasing and fun to play. We gave ourselves an objective: having the game finished to a playable state by Saturday evening. This would allow us to spend Sunday refining the esthetics, add UI and, if time, additional features.

The core principle we always apply when participating in any game jam has always been: KISS - Keep It Simple, Stupid. This is the best advice we can give anybody who wants to create a game in a weekend.

About our GGJ game, the prototype of Hermit: an Underwater Tale

Our jam game is playable on Newgrounds. The idea was to quickly build a fast paced arcade game for one player. We wanted it to be difficult and skill demanding. We played a lot of Curses’n Chaos from Tribute Games back at that time and we tried to get a similar vibe with our entry. Curse’s n Chaos is a retro-ish arcade game where you battle hordes of enemies in a single screen. So we choose a similar set up for our game (if not the same). 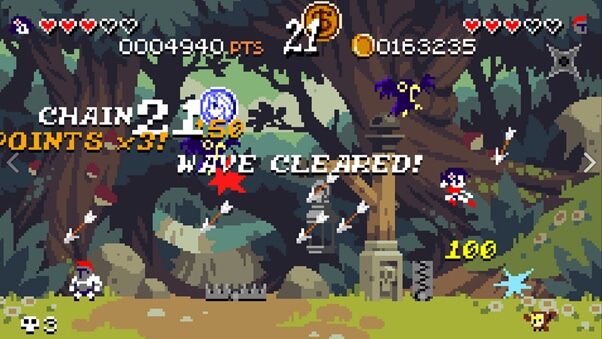 In our game, you play as a hermit crab who faces waves of dangerous sea creatures. In order to protect yourself and defeat your enemies, you will use a variety of empty shells as weapons. Each shell comes with a specific set of moves and attacks and will eventually break after use. Without any shell, the hermit is fully exposed and any damage he receives will be lethal. As you can only inhabit a single shell at a time, you have to be cautious and carefully manage the ones available depending on the threats you have to overcome.

We initially planned to implement 3 different shells and 3 different enemies in a single locked screen arena. As the time is short, we didn't get to implement the last shell. However, the two available shells work great together and feel different enough to make our entry enjoyable and complete.

At the end of the GGJ, we were exhausted but also really proud of what we achieved. This was clearly our best entry in any jam we had the chance to participate in. 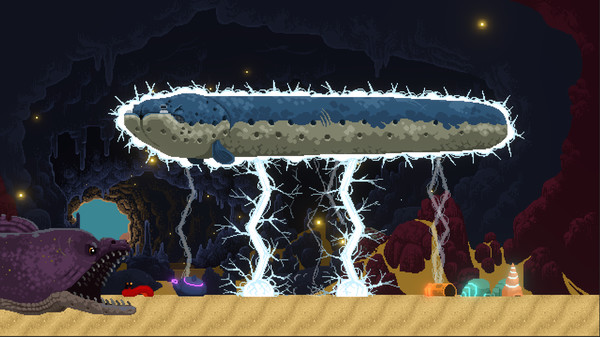 Turning the jam game to a full published title

After the jam, we submitted our game to various sites like newgrounds. Giezi implemented a global high score to see how well players around the world were doing playing our game. It was a ton of fun to see the numbers and some of the results were really crazy (How can this player manage to play for over 30 min without dying?!). Hermit reached the frontpage of Newgrounds and earned the 3rd daily place. Comments regarding the game were really positive and encouraged us to go further with this idea.

Some months later, we participated in an open call to gain funding for game development in Switzerland using our jam entry as a prototype. We got the grant. This was a very big reward for us to get our work “validated” by industry experts.

With the grant, we created our game development studio, Early Coffee Games (you can follow us on twitter @EarlyCoffeeGame and on our website), and we are currently continuing on our game from the GGJ, for which we just created a Steam page and a trailer! A big milestone for us.

The game has since it’s jam prototype version evolved quite a bit. Tristan complexified the graphics, adding a lot of depth to the characters and the environment. Everything is still work in progress. The core mechanic remains the same: Hermit is super squishy, you need your shells and mobility in order to survive. Instead of the single infinite high-score driven level, we are developing a multi-stage world with an interesting storyline - and an underlying menace (spoiler: underwater pollution, a theme we want to address). 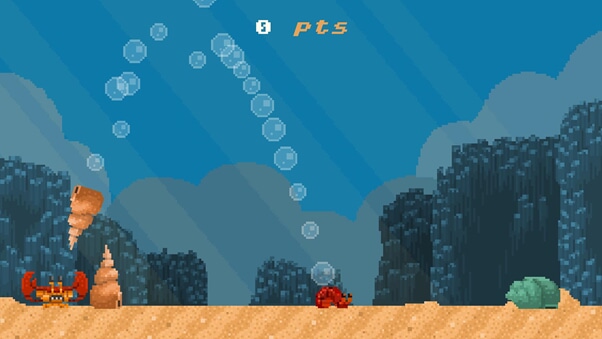 GGJ is a great experience to anybody interested in game development

The thing about being there in person, all in one room focused on the same task - developing a game - creates incredible opportunities to meet other people interested in game development.

At one point, we discussed sounds and music for our game as the development was at a steady pace. None of us like to work with sound and we usually do it in a rush at the end. We noticed somebody next to us with headphones making stuff for another team. We reached out, jokingly asking if she wanted to make sounds for us as well. We were really surprised when she said yes. We gave her a list of sounds we needed and she disappeared only to reappear on Sunday afternoon with everything ready. That was amazing. Plume has been working with us ever since, creating all the music for our games. Check out her youtube, she does amazing things!

Whether you are experienced or a total beginner, in a team or alone, the GGJ is a super cool opportunity for everybody. As an experienced team you get to work on something different for a weekend, meet new people and discuss ideas you wouldn’t necessarily have. As a beginner you will meet more experienced people willing to walk you through the basics, and meet other people to form a team if you’re alone. There are always people randomly joining in from all horizons.

Since Covid this has become a bit more difficult, but the IRL event really helped us meet the community, and focus on that one task for the whole weekend, something which is more difficult with other jams like Ludum Dare, where you’re mostly alone.

So all in all a great experience we would recommend to anybody interested in Game Dev!

Big shout out to the Geneva team for being so welcoming and caring, making this live event possible and everyone involved for being lit.

Jam Version: Hermit the lone sluggish caterpillar of the Sea